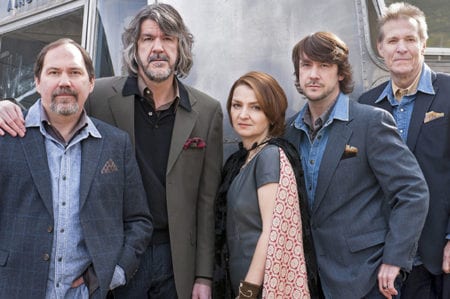 The St. John’s Hospital Foundation is thrilled to bring the 2016 Grammy Award-winning bluegrass band The SteelDrivers to Jackson. After winning a first-time Grammy award for the acclaimed #1 album The Muscle Shoals Recordings, The SteelDrivers are taking 2016 by storm. The group has played to numerous sold-out venues this spring.

“What better way to celebrate one of the community’s most important assets – St. John’s Medical Center – than with a community celebration and birthday party,” said John Goettler, Foundation president. “The Jackson Hole community has been incredibly supportive of St. John’s Medical Center since it was built 100 years ago. We are grateful for the commitment and financial support of our community donors, and this party is a chance for the Foundation to say thank you! We hope that everyone in the community will come and join the celebration.”

Festivities will begin at 4:00 pm with the Hootenanny Allstars, featuring several members of the Jackson Hole Hootenanny. Brent Moyer and Friends take the stage next, with special guest Nashville artist Mike Dowling on guitar. Rounding out the concert program is the Nashville-based band The SteelDrivers, which has been playing to sold-out audiences throughout the country. The music portions of the Centennial Celebration will be produced by Jackson Hole Live.

The Jackson Hole Hootenanny, itself a historic institution, goes back 50 years when Bill Briggs brought artists and musicians together under a bridge in Grand Teton National Park. In the 1990s, the Hoot (as most people call it) moved to Dornan’s Bar in Moose and showcases musicians every Monday night.

Songwriter and multi-instrumentalist Brent Moyer moved from Jackson Hole to Nashville in 1986, but makes a pilgrimage each year to reconnect with the Jackson music scene. Known to many as the Global Cowboy, which is also the name of his 2008 recording, Moyer has released a total of 13 albums.

Teton County under Flood Watch for the weekend

Public comment to be limited on Teton County Fairgrounds development

In cooperation with Safari Club International Foundation and American Bear Foundation, the Wyoming Game and Fish