The Story Behind How Knightia Became the Wyoming State Fossil

Saturday Marks 30 Years Since the Designation

Before the Wyoming Legislature voted to recognize the extinct fossil fish, Knightia, as the official state fossil in 1987, lawmakers debated whether the designation should be bestowed on the rattlesnake. The lawmakers were not serious, but Cheyenne elementary teacher Frank Miller and his students did not know that as they watched in disbelief from the capitol’s balcony.

“Unbeknown to us, the legislators on the floor had decided to show us the process a bill can have during its life on the floor and on its way to becoming a law,” Miller recalled. “What they decided to do was exemplary, but it scared my students to death.”

Miller and fellow teacher Maudie Barker campaigned with their students for Knightia to be chosen as the official Wyoming State Fossil. Their mighty effort paid off, and on Feb. 18, 1987, the class was on hand to witness Wyoming Gov. Mike Sullivan sign a bill recognizing Knightia as the state fossil.

In honor of the 30th anniversary, the Wyoming State Geological Survey partnered with other entities to host the Fossil Fish Festival this Saturday, Feb. 18, at the Berry Center on the University of Wyoming campus in Laramie. Miller’s son informed him about the event celebrating Knightia, evoking Miller’s memories from three decades ago, including the rattlesnake joke played by legislators.

Here is the story of the path the Knightia fossil took to becoming Wyoming’s State Fossil as best recalled by Miller, a fifth-grade teacher at Anderson Elementary School at the time.

Miller said it was Barker who brought her love of geology to school and developed the Fossil Club.

“At the end of the school year, Maudie would fill up my truck bed with ‘fossils,’ and I would hide them in the prairie behind Anderson Elementary,” Miller said. “On our last club meeting for the year, we would take the kids out and they would discover their very own fossils.”

Barker decided it would be great if the club could get the Legislature to designate a state fossil. She reasoned that Knightia would be an excellent choice because of its relevance to the state and to the University of Wyoming. The fossil fish is named after Wilbur C. Knight, the first Wyoming State Geologist and University of Wyoming Geological Museum curator.

The Fossil Club was unsuccessful on its first attempt to pass the bill. The second year, however, they had help from State Rep. Elizabeth “Liz” Byrd. The bill advanced to a legislative committee that heard testimony from several club members, including Miller’s three sons, David, Mike and Steven.

When the bill reached its third and final reading by legislators, the club took a field trip to the Capitol Building. They were given the rules of decorum and told if they talked or created noise, they would immediately be removed.

“So, we sat there, 20 feet up in the air watching, with bated breath and closed mouths, the future of all our work being made into a law on the floor of the Wyoming Legislature,” Miller said.

The club listened as legislators added and then debated the amendment to designate the rattlesnake as the state fossil. The amendment was defeated, and the bill passed.

“The Knightia would become our state fossil. We had done it,” Miller said.

Miller was later approached by legislators who asked why his students did not cheer and shout to celebrate their success, as that’s what they had expected.

“I told them about the admonishment from the sergeant at arms and what would happen if we made any noise,” Miller said. “They just laughed. We did cheer on the bus ride all the way back to Anderson. It was a glorious day full of true learning for all of us.”

Miller has since retired from teaching, and he and his wife, Jean, now live in Houston.

Saturday’s Fossil Fish Festival is from 11 a.m. – 3 p.m. More information about the festival can be found here. Admission is free. 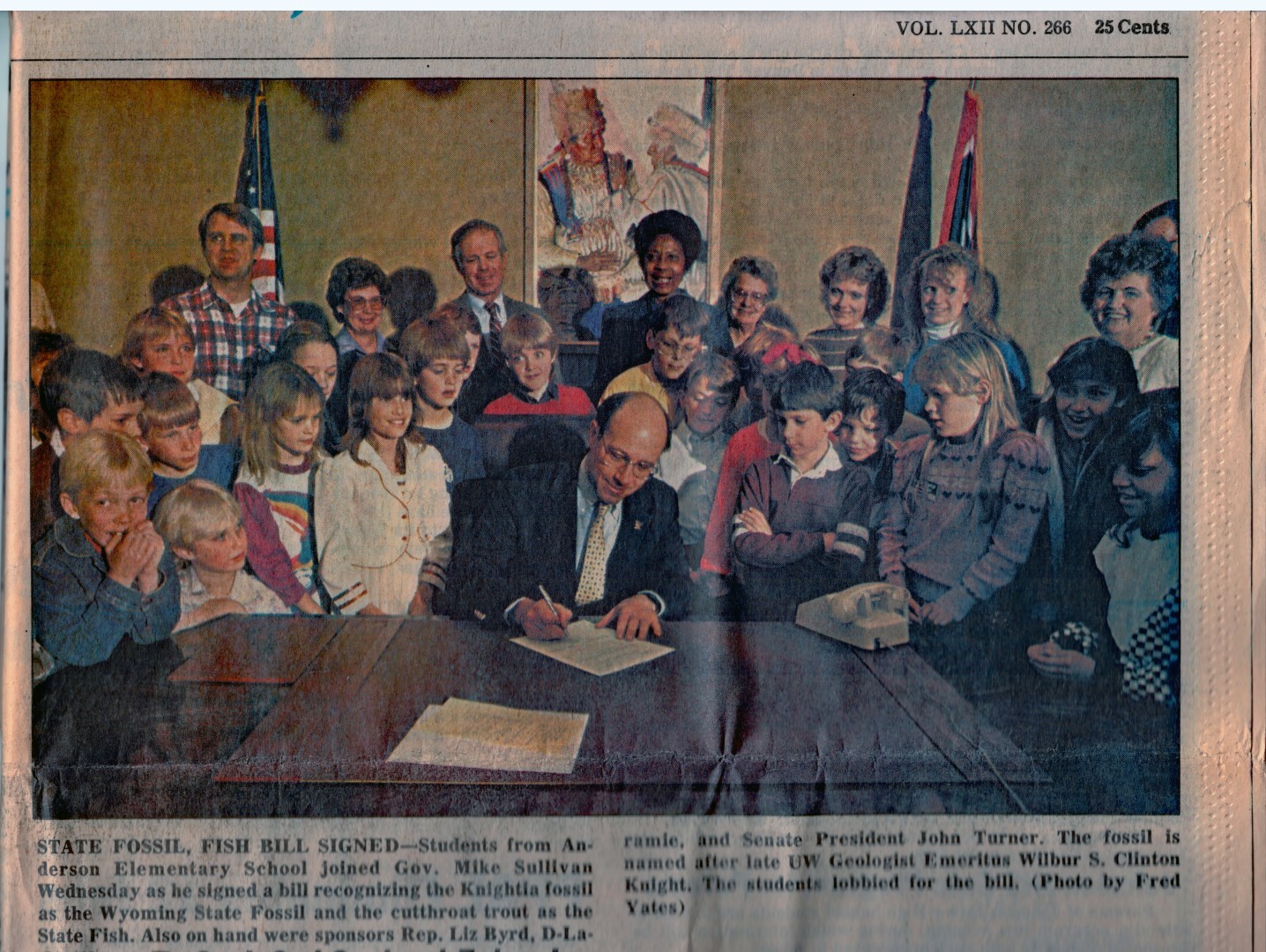 Dinner With A Doc Next Thursday