Imagine going to your front door and spotting a grizzly bear just outside. That was what happened in a residential subdivision in Teton County near the western boundary of Jackson this weekend.

The bear is a member of the #399 family who have been roaming through the valley since late this summer and have forced officials to consider what to do to avoid a potentially dangerous outcome.

The U.S. Fish and Wildlife Service, and National Park Service, and other federal and local agencies, are increasing efforts to monitor  #399, with the hope of preventing further conflicts before the bears hibernate for the winter

A statement issued from the Fish and Wildlife Service said bear #399 and her cubs continue to receive food rewards from unsecured attractants in the Jackson and outlying areas to the south, such as livestock feed and beehives.

Since the beginning of August and as recently as this weekend, there have been many verified incidents of #399 receiving food rewards from livestock feed, damaging and accessing beehives. 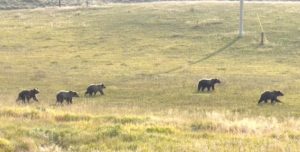 #399 and her yearling cubs have been seen throughout Teton County as far south as Hoback Junction and recently near Indian Trails Subdivision.

At this time of year, bears are actively seeking out high calorie sources and can easily be attracted to human sources of foods.

Wildlife biologists continue to remind residents and visitors that they have a responsibility to be “bear aware” and need to take immediate steps to secure attractants such as garbage cans, livestock feed, and compost piles.

Escalating problems with these famous bears could ultimately lead to their demise.  On October 16th, Grand Teton National Park officials, in coordination with the U.S. Fish and Wildlife Service and the Wyoming Game and Fish Department, were forced to euthanize a highly food-conditioned, four-year-old female grizzly bear who was also an offspring of #399.

Some of Teton County is within a “Bear Conflict Zone” where officials mandate the use of bear-resistant garbage cans and are also able to enforce rules on wildlife feeders and other bear attractants.  Much of the #399 family’s current travels are not included in the conflict zone.

Many in the community are asking for the zone and its requirements to be expanded. A petition was launched demanding that Teton County and the Town of Jackson require bear proof garbage cans for all properties in the valley.

Dockstader to run for Secretary of State