The man accused of pushing over and causing about $5000 damage to the elk statue in front of the Pink Garter Plaza last Sunday morning has turned himself in to police.

The person has been depicted in released photos this past week and was identified thanks to numerous tips from the community.

Even as detectives were actively seeking the subject to speak with, he learned from a friend of the media attention the case was receiving and turned himself in to the police department yesterday. 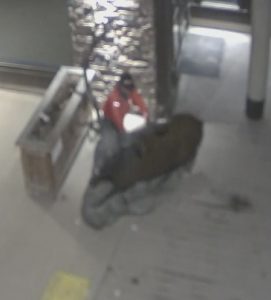 Following interviews by detectives, charges are to be filed in the case through the Teton County Prosecuting Attorney’s Office.

Meanwhile, several names are being forwarded to CrimeStoppers for reward consideration.

The Jackson Town Council will again consider increasing the salaries

The Jackson Police are investigating an incident at the Pink

Yellowstone’s geysers and thermal pools are hot enough to kill

Yellowstone opening up most of the park Saturday

Yellowstone National Park will reopen the north loop today to all visitors. Visitors can access the south and

A fire burning on the Big Piney Ranger District of the Bridger-Teton National Forest. The Sandy

A 71-year-old woman from West Chester, Pennsylvania, was gored by a bull bison near Storm Point

After record flooding shut much of Yellowstone National Park early this month, the park will reopen