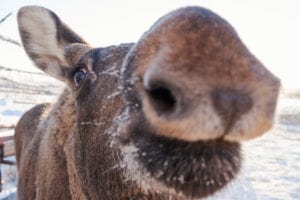 A Wilson resident was injured by a bull moose around 7:15 am Friday morning while reportedly walking his dog on the bike path northeast of the Wilson Elementary School. The man said he noticed the bull moose approximately 50 yards away and his dog remained at his side when the bull decided to charge and knocked him down. The unnamed man was admitted to the hospital for his injuries.
After Game and Fish officials received the report Saturday, they responded to the scene, but did not see a moose in the area.  While human injuries from moose are not common, Game and Fish officials are warning people that it is now the fall mating season for moose, elk and other ungulates which can become unexpectedly aggressive, and they urge the public to give the wildlife plenty of room.