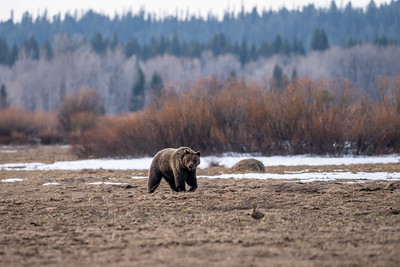 65-year-old Lee Francis of Evanston was hunting Friday with his son in the Rock Creek area along the Sawtooth mountains in Sublette County when he was attacked by a grizzly bear.
At 5:50pm Sublette County Dispatch received an SOS activated 911 call and Tip Top Search and Rescue volunteers were immediately paged and were sent to rescue Francis and bring him out of the backcountry for medical treatment.
After he was attacked, Francis was able to quickly fire several rounds from his handgun which caused the bear to stop the attack and run away. However, in the struggle, one of the bullets hit Francis’s leg.
Francis’s son activated his SOS device for help then provided first aid to help control his bleeding.
TTSAR members met up with the hunting party around 9:20pm and Francis was flown to the University of Utah Hospital for further treatment.
Wyoming Game and Fish was also notified, and Game Wardens are currently investigating and trying to find the grizzly bear.
This marks the second grizzly bear attack this month in Western Wyoming.
nps-adams photo