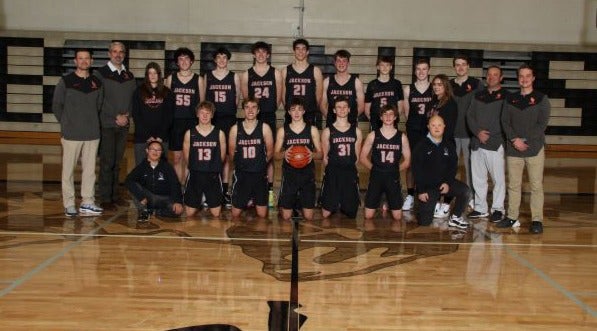 The Jackson Broncs basketball team (3-1) impressed over the weekend at the Strannigan Tournament in Riverton/Lander. The boys basketball team picked up decisive wins over Cheyenne South and Rawlins, before dropping their first of the year against Sheridan, and rebound with a thriller over Laramie.

A preseason coaches and media poll released last week might have provided some incentive for the Broncs as Jackson was ranked 7th out of the 16 teams in the 4A. Jackson received 1 voted for 3rd, 2 for 4th and 1 vote for 5th—putting the Broncs just behind Star Valley, but ahead of Riverton in the rankings.

Jackson led all the way behind their big man Hanna once again. He had 22 points.

The Cinderella run for the ’22 season was ended Friday night when the Broncs ran up against a talented and determined Sheridan squad and squandered a strong start only to fade late. Sheridan did a good job limiting Jackson’s big guns to come away with a 60-49 win.

The Broncs used a monster 3rd quarter to overcome a slow start and hang on for a 64-60 victory over Laramie to close out the Strannigan Tournament last weekend.

It was Brunner and Keelin who led the way for Jackson against the Plainsmen. Both came up clutch in the 26-point 3rd quarter. Isaac Larsen added 11, including three 3-pointers. Hanna had 8 points on night.

The strong core of juniors (Hanna, Keelin, Brunner, and Fowler) will take Jackson as far as they want to go this season. In addition, Coach Hatfield has more depth than ever before with reliable seniors like Carson Harland, Isaac Larsen, and Mack Fairbairn. Underclassmen, including Willis Witherite and Palmer Wetzel, will also be pushing for more playing time.

The Broncs will take part in the Faming Gorge Classic this weekend in Green River before the holiday break.