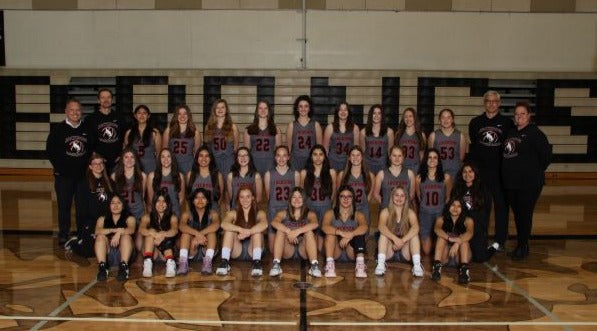 The Jackson Hole Lady Broncs basketball players are under no delusion about what’s in store for them this season. They are super young and inexperienced. But, as optimists will point out, there’s nowhere to go but up.

Since jumping to 4A in 2016-17, the Lady Broncs have managed just 15 total wins in six seasons. By contrast, last year’s 4A champs Cheyenne East had 28…in one season.

But with Sean Shockley back in charge of the program, expectations are high that the girls will at least learn how to get better, and enjoy the ride back to the top. After all, under Coach Shockley, the girls last won a state title in 2009-10. The boys haven’t done that since 1984.

The Lady Broncs received a rude awakening to the ‘22-23 at the hands of the Lady Bison. South rolled to an easy victory over the young Jackson squad in a low-scoring affair Thursday afternoon.

It didn’t get any better for the girls Friday morning as they were on the wrong end of a lopsided score: A 41-point victory for 3A’s Lady Outlaws of Rawlins.

The Lady Broncs were not able slow down Sheridan much in Friday night’s disappointing loss. Jackson managed just 5 points of offense against a very good Sheridan team.

An inexperienced Lady Broncs team already depleted by injury and a couple of players who did not make the road tournament were unable to muster much against the Lady Plainsmen.

Laramie kept the pedal to the metal—pressing all game long—to easily get past Jackson.

With the 0-4 start to the ’22-23 season, the Jackson Hole Lady Broncs have now lost 21 straight dating back to last season. The girls head to Green River for the Flaming Gorge Classic this weekend.