The Jackson Broncs will give hometown fans their first look at the team up close and personal this Thursday night when the girls and boys tap against the Teton Timberwolves.

Jackson is getting attention across the state as a team perhaps destined to make a run at a state title this season. A 5-1 start to the season has the Broncs ranked 4th in the 4A as they begin regular season play tomorrow.

Coach Hayden Hatfield has his core four to lean on—juniors Andrew Hanna, Gavin Keelin, Seb Brunner, and AJ Fowler—a group that has played together at the varsity level since they were freshmen. In addition, he has senior leadership in the backcourt with ball handlers Isaac Larsen and Carson Harland, plus a deep bench filled with talented athletes who are more than just minute eaters.

Players like Palmer Wetzel, Christian Lack, and Willis Witherite are pushing for more playing time—a dilemma coach Hatfield said he is all-too happy to have.

“Honestly, getting everyone rotated in is not easy. They all deserve minutes,” Hatfield said.

Teton will be a good test for the Broncs. The Timberwolves have an athletic team, with some size, that likes to play fast.

There’s no two ways about it, the Lady Broncs (0-6) are in for a long season. Coach Sean Shockley has his work cut out for him as he takes over a program in need of stabilization. Shockley is the perfect guy to keep things positive and keep players focused on bettering themselves. 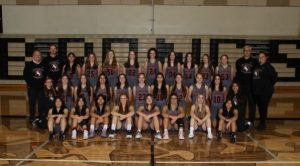 This team is young. Really young. Just two seniors on the roster and not a single player with any varsity experience prior to this season. Most nights, Shockley will have an underclassmen team playing with freshmen and sophomores leading the way in playing time.

Things won’t get any easier against Teton. The Lady T-wolves  are 9-4 coming into Thursday’s contest with a roster loaded with standout players.